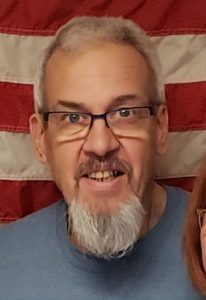 Larry Scott John, 69, of Hopewell Twp., passed away on Thursday, September 15, 2022 in West Hills Health and Rehab.  He was born in Sewickley, PA on September 10, 1953 the son of the late Georg & Ruthann John.  He worked at J&L Steel in the Tin Mill, Robert Morris University in the library and with Command Services as a security guard at the Pittsburgh Airport.  He was a lifetime member of the Hopewell VFW Auxiliary and a member of the Glenwillard Boat Club. He enjoyed camping, bowling and being around people.

He is survived by his beloved wife, Marcy John; a brother Paul (Patricia) John; a niece and nephew: Tiffany (Ed) Hogya and Paul Michael (Jennifer) John; great nieces and nephews: Joe and Maria Hogya and Mikayla and Brian John; a sister-in-law: Robin (Greg) Scharding. He will be sadly missed by his loving dogs: Blueberry, Addey and Joy.

In addition to his parents, he was preceded in death by his father-in-law and mother-in-law: Frank & Norma Kirin; and a dog, Lacey.

Friends will be received on Monday from 2~4 & 6~8pm in the Huntsman Funeral Home and Cremation Services of Aliquippa 2345 Mill St. where a funeral service will be held on Tuesday at 11am.

Memorial contributions may be made to the Beaver County Humane Society, 3394 Brodhead Rd. Aliquippa, PA 15001.