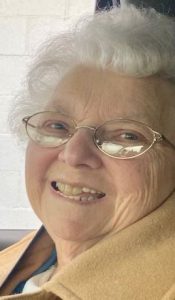 Elizabeth H. (Betty) Summers, 84, of Rochester Twp., passed away on Friday, June 17, 2022 at The Villa St. Joseph Concordia.  She was born in Rochester, PA in 1938, the oldest child of the late Charles and Marie (Kovach) Graff of Rochester Twp.

Elizabeth, often called Betty, came from a large, loving family.  She was the oldest of eight children and was extremely close to her mother and siblings.  Only God came before family for Betty.  Betty was a devout Catholic and lived her faith every day.

Betty graduated from Mount Gallitzin Academy and then attended Duquesne University where she earned her degree in elementary education.  (She actually worked her way through college and commuted to Duquesne University from Rochester for four years!)  She was a lifelong educator who took exceptional pride in educating the youth in her community.  She taught for over two decades at her beloved Saints Peter and Paul (SSPP) Catholic Grade School in Beaver, PA.  Betty always taught her students, especially her own five children, that to be successful in life, one must have a strong foundation built around God, family, and education.

Betty and her husband Tom made huge sacrifices over the years to put their five children through Catholic grade schools and then through Quigley Catholic High School.  They then assisted each child with attending and graduating from post-high school education or college.  They both used to say that they “valued a faith-based education for their children over a fancy house or car.”

Betty was very active volunteering.  She was a past member of the Christian Mothers at St. Cecilia Catholic Church, a former member of the Rochester Twp. Volunteer Fire Department Women’s Auxiliary Club, a past CCD teacher at St. Cecilia, a former Cub Scout leader, as well as engaged parent volunteer at SSPP and Quigley.

The visitation will be held on Monday, June 20, 2022 from 3-7 pm in HUNTSMAN FUNERAL HOME AND CREMATION SERVICES OF ROCHESTER.